No one can celebrate
a genuine Christmas
without being truly poor.
The self-sufficient, the proud,
those who, because they have
everything, look down on others,
those who have no need
even of God—for them there
will be no Christmas.
Only the poor, the hungry,
those who need someone
to come on their behalf,
will have that someone.
That someone is God.
Emmanuel. God-with us.
Without poverty of spirit
there can be no abundance of God.

This week America begins its mad dash toward Christmas. Or, I should say, America accelerates its mad dash; the move toward the holiday season began some weeks ago. And no, this isn’t the usual anti-commercialism-of-Christmas rant. My dear newsletter reader, you have certainly read enough of those. This year I want to be decidedly pro-Advent.

Advent is a season often misunderstood, a prelude to Christmas festivities. When Advent comes across as merely a liturgical preparation for the celebration of Christmas, it is really nothing more than the Church’s version of the shopping season. Busy, busy, busy, with all the things that need to be done: Christmas pageants, decorating, and all the rest. Alas, another spiritual wasteland!

But Advent is much richer than that, and decidedly counter-cultural. As the Church, we can begin to reclaim a bit of the heart of Christmas by finding some rest and nourishment here in Advent. It’s not so much an anticipation of Christmas Day (Macy’s takes care of that just fine) but rather an anticipation of Christ’s future coming, his Second Advent. The scripture lessons for the season bear this out, speaking of that great and promised time when the nations “shall beat their swords into plowshares, and their spears into pruning hooks,” (Isaiah 2) and when “the earth will be full of the knowledge of the LORD as the waters cover the sea.” (Isaiah 11) “The day is near,” says St. Paul, and he’s not speaking of a magical Christmas morning, as lovely and wonderful as that is; he is speaking of the true day, the coming of the light that shines in the darkness. Advent returns us again to this hope, looking back at the coming of the Savior in Bethlehem, looking forward to his reappearing in glory. It is the hope of creation restored, evil vanquished, and death defeated. Even the most glorious Radio City Christmas show pales in comparison.

Be still, the scripture admonishes us. Tall order, this time of year! Without poverty of spirit, without coming to terms with our deep need and longing for the living God, here and now, it is not possible to celebrate Christmas. I pray that you find—in the midst of the bustle of the season—some inner space, a moment of quiet, perhaps a pang of spiritual hunger. May these short days be filled with great hope, and may that ancient Christian prayer be never far from our lips, “Come, Lord Jesus!”
Posted by tom kildea at 10:42 PM

Seeds in the City 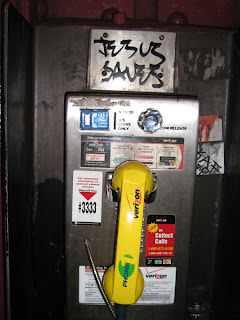 That feeling may just be another symptom of encroaching middle age. In youth, if the world doesn't revolve around you at least you feel like a pretty big player in it. Invincible. Eternal. The older you get (I've come to discover) the smaller you get. The world becomes impossibly large. You, a speck, a drop in the sea of time and space.

These are not, perhaps, the kinds of thoughts one is expected to have in the company of teenagers on a church trip. But this particular trip - service in New York City - kindled just those kinds of thoughts for me. On one hand, a city of amazing proportions, people everywhere, millions of intesecting intentions, motivations and beliefs, the inevitable glimpses of terrible human brokenness. On the other, tiny, seemingly insignificant acts of kindness.

And so who are we to imagine that picking up a paintbrush is going to make much a difference to anyone? And cleaning out some damp church basement? How does that reflect the kingdom? How does that impact the world?

In human terms probably not very much. But, as it is said, we are not called to greatness; we are called to faithfulness. The kingdom of God, in this regard, is rather a small thing.

We're not called to greatness; we're called to faithfulness. In a sense you might say we are called to smallness. In our care of the small things we are trusting God in a big way.

It seems to me that many folks struggle to make sense of what it means to follow Jesus in our world. Perhaps the idea seems so impossibly huge, so beyond reach, best left to the experts. But we would do well to reflect on that little mustard seed. A tiny thing, like the thousands of moments each day, so ordinary and insignificant. Seeds of the kingdom.

Reflections on the Great Vigil 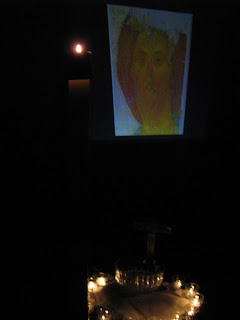 Easter is already a few months behind us, but I thought a few shots of the Easter Vigil set-up would be interesting. The Vigil (which begins as dusk on the Holy Saturday, the day before Easter) is actually the first note of resurrection in the church's liturgy. For me, it's the highpoint of the liturgical year. 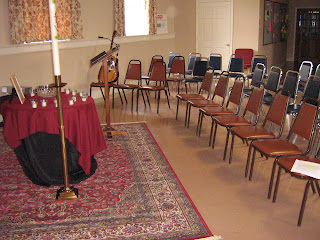 I would have preferred to have some pics of the actual service but they would've been hard to come up with. Snapping pictures during worship isn't the best idea, plus the fact the lights are pretty low throughout. But here are some pictures of the set-up in the Fellowship Hall at Redeemer. We process into this space (from the "new fire" on the lawn) to the service of readings, all 12 of them! All in candlelight. 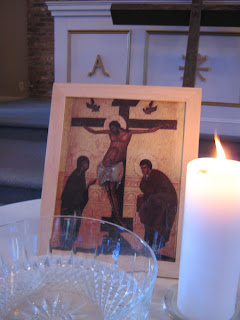 This is actually a shot from the children's service on Good Friday.
Posted by tom kildea at 6:43 AM